PD Warrior is an early intervention strategy for people who have idiopathic Parkinson’s disease.

Traditionally exercise prescription has been unable to prevent the number of falls in people or slow the progression of symptoms of people with Parkinson’s. Recent evidence has shown that greatly improved results are possible by treating people early – with intensive, amplitude-based and multi-tasking training strategies.

Here’s the Channel 10 interview and info session about PD Warrior:

PD Warrior aims to do more than improving general fitness.

It has been designed to drive the neuroplastic ability of the brain, and recover movement impaired by learned non-use. The results from PD Warrior typically show improved quality of life and self-efficacy, more so than medication alone, as well as a reduction in the number of falls people have and occasionally a return to pre-diagnosis activity levels. 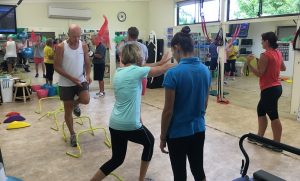 Who PD Warrior is appropriate for

People with severe depression, freezing and falling will be screened carefully prior to entry to the program.

For further information call here on 9527 4099 or go towww.pdwarrior.com